Like other developing countries I have been to, Guatemala seems to have two parallel worlds.

It’s green and lush yet has suffered huge amounts of deforestation. The people are smiling, welcoming and friendly yet the second most common cause of death in 2011 according to worldlifeexpectancy.com was violence! Second in the world! It feels safe as we travel about yet until recently there were frequent bus jackings. A local art gallery owner told us how the population had put a stop to this. When travelling by bus, you simply carried a small can of kerosene. If anyone attempted to hijack a bus they were overcome by the passengers and lynched.

Mayan mothers carry their babies on their backs until they can walk and this seems to lead to well-adjusted, well-behaved infants but the infant mortality rate is 25.5 per 1000 (in the UK it’s 4) according to indexmundi.com

We have read and heard about government and multinational policies that do nothing to help the situation. We were told that there are 8 to 12 families that have political control and that corruption is rife from the local level up. There is no money for education or health. Poor families have to buy books, uniforms and equipment for school and this often prevents children completing their education. While we were in Pana the mother of one of the office workers was taken ill with stomach pains. The health centre in Pana has been closed due to lack of funds so she was taken to hospital in a town about half an hour away. The hospital also lacks funds and expertise and was unable to provide a diagnosis but told the family to prepare for her death. She died within the week. There will be no postmortem.

International policies encouraging Guatemala to grow maize for export to be used as biofuels while importing maize for food have also not helped.

There is no shortage of individuals and organisations who recognise the problems of Guatemala and who are trying to help. There are literally thousands of NGOs here with tens of thousands of volunteers covering everything from dog rescue to organic farming, from reproductive education to fair trade cooperatives. Some of these like Plan, Care and Save the Children , operate large scale projects; others, like Maya Traditions, where we worked, are much smaller. We met a Canadian woman who had come with a group of medical specialists who had carried out cataract operations, tooth extractions, hernia operations and other procedures on people living in remote villages with no access to health care. We have concluded that in order to contribute effectively as a volunteer you need to have specialist skills, and to make a long-term commitment. Sadly, our own contribution was minimal.

Our other, more far-reaching, conclusion is that while all these NGOs can make a difference in the lives of individual Guatemalans what is really needed for a lasting impact is the will nationally and internationally to make policy changes. Fair elections with proper recognition for the indigenous people and their languages; investment in health and education for all; improved security; policy change on access to reproductive control; regulation of child labour. While some NGOs do actively put pressure on the government to improve in these and other areas (diahorreal diseases are the third biggest killer and malnutrition the eighth) international governments and corporations need to act as well and we need to vote and act to communicate to our own policy makers and corporations how we feel about these policies in Guatemala and other developing countries.

Lake Atitlan a cautionary tale for us all.

Only 50 or so years ago the water in this 85000 year old lake was so clear that it did not contain any nutrients. Atitlan’s very existence was known only to few people and it barely showed on the map. Then along came Pan-Am Airlines who helpfully suggested to the new government (just installed following CIA organised coup that ended the first 12 years of honest democracy the country had known! ) introducing Black Bass to create a sport fishing mecca that was sure to bring wealthy Americans by the Pan Am plane load. Now if any thought was given to the impact of doing this, then it was a brief one! Good old Pan Am even provided a plane that literally bombed the lake with these ferocious bastards. With no natural predators it was soon more or less curtains for the other species of fish, fresh water crabs and even snatching young Pato Pocs ducks and their equally rare cousins the Atitlan Grebe (that lost its crab food sauce).

Now an environmental disaster like this should have woken everybody up and indeed it started to. Around 2001 an NGO suggested introducing another alien fish species, Carp to the lake, they were rounded on sharply for the idea and so the scheme was soon “dropped”, but then only one year later fisherman started catching carp in their nets!

Carp are a particularly useless fish, they provide poor eating due to being full of bones, they’re bottom feeders that just suck up and disturb everything on the lake bed and then shit it out causing algae to develop and “bloom” with disastrous effects on the water quality and just to cap it all, even the bloody Bass wont eat them! At this point I must point out that the presence of nitrate run off from the nearby farm land has also contributed. This blooming algae has been so bad on occasions that the smell from the rotting bacteria has almost closed down the tourist industry that is the economic heart of the area now.

This sorry tale just demonstrates just how complex and fragile our eco systems are, there are no simple solutions or answers despite what ANYBODY tells you. Please question and challenge everything politicians, think tanks and the big corporations tell you, its not being regressive its just bringing the rigor to bear that too often is sidestepped because “its an unnecessary distraction”.

Our time here at Lago Atitlan is coming to an end, on Saturday we are moving on, going to a place called Copan across the boarder in Honduras. We still have a few places to see here in Central America before we fly to California and beyond.

We are both glad we stayed here in Panajachel on the shore of lake Atitlan, the town itself is no oil painting (although there are enough people trying to sell you just that!) but being the main hub for the lake most visitors arrive here by road first before taking one of the numerous ” lanchas” on to their destination in one or other of the towns dotted around the lakes edge. We are glad, not because of undoubted and stunning beauty of the Vista or the vibrancy of the colours everywhere you look, but because of the people we have met. We have been blessed on this trip to have encountered so many warm, generous and interesting folk who have been happy to reveal a bit of their lives to us and allow us peep behind the curtains.

Today we said hasta luago to three of these folks, Edgar, Oseas and Beatrice. We met through our involvement in the production of cutting edge pharmaceuticals (or as some cynics describe, volunteering mornings in the medicinal herb garden). Edgar & Oseas are locals employed by Maya Tradition the NGO that run it, Beatrice, a lovely clever and somewhat ditzy Italian volunteer who came here to learn about natural medicine. Not being a keen gardener, I did a bit of carpentry leaving most of the green planty things to the girls, we all enjoyed the time spent in the garden, but all felt that things could have been done more effectively, this was born out of concern for the sustainability of the place rather than simply the utterances of three know-it-alls. When the lads sprung a huge decorated cream cake and a brew of (herbal) tea to thank us, we were humbled. They had bought what was no doubt an expensive cake for us and showed genuine appreciation for what we had and real sadness that we were leaving. Reminding us all that it is easy to breeze into a place and see the shortcomings and fail to take in all the effort and hard work that has already been put in. Yes, improvements can and need to be made, but my respect for young Edgar and Oseas (who over 14 years has carved out the terraces on this Rocky hill by hand) is absolute. Two top chaps and I wish them both every success in their endeavors.

We’re leaving Pana on Friday and today was the last day in the herb garden for us and Beatrice. Edgar and Oseas got us the most amazing cake! And Beatrice got us a lovely bunch of flowers. 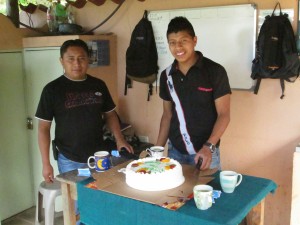 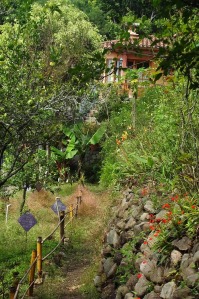 The herb garden is on a steep mountainside right next to our apartment. It’s beautiful; jungly, quite overgrown and peaceful with just the sound of birds and constant running water. The soil is dry, volcanic and stony so quite difficult to work on. As well as gardening the two guys who work there (Edgar and Oseas) build paths, steps, railings, drying cabinets, make shampoo, teas and tinctures. The garden is intended to promote traditional methods of using the herbs for medicine etc and, surprisingly, most of them seem to be European imports: mint, lemongrass, sage, basil etc rather than indigenous to the area. Any profit is used to support the educational aspects of the foundation. 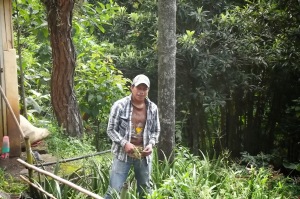 Edgar works full time in the herb garden as well as working as an office worker for another company and studying agronomy. He’s 19, the eldest of 7 siblings who he helps to support. He’s very interested in hearing about the UK and would like to travel, though he intends to settle in Panajachel.

Oseas has been working for the foundation for 14 years and he spends 2 days a week in the garden allocating work. He has three children. He’s a harder task master than Edgar and has built the garden up to what it is today. 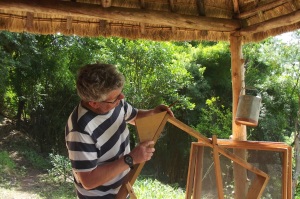 In the garden we’ve been weeding, watering, cutting herbs, cutting up the leaves, washing and disinfecting them before drying out in the cabinets so they can be made into teas. Sean has found some carpentry to do where he is much happier.

Work in the garden is quite organised but not that efficient and they could have used us much more but it has been a great opportunity to talk to Edgar, and to see how the NGO works in practice. 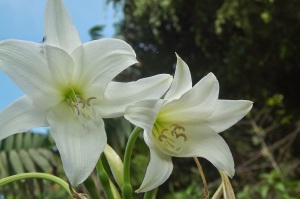 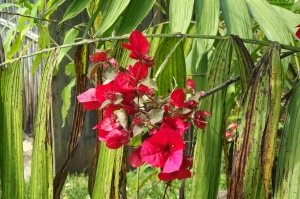 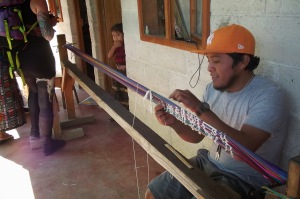 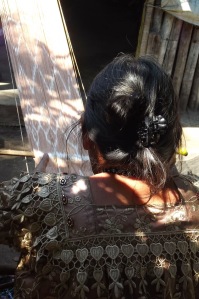 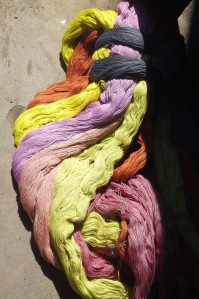 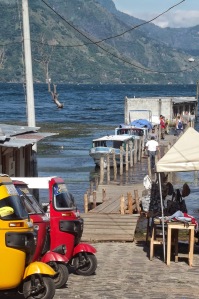 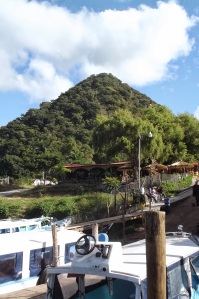